I’m one of the bloggers participating in The Canadian Food Experience Project, a national program that’s helping to identify (or at least add clarity to) a Canadian food identity. It’s a fun program that has been making me stop and think about what makes some food distinctly Canadian.

This month’s task was to write about a regional Canadian food.
I’m from Southern new Brunswick, where the province reaches along the cliffs and beaches of the Bay of Fundy, home to high tides and spiralling herring weirs. It’s here that for generations fishermen have been catching sardines, juvenile North Atlantic herring. For over 100 years they have been canned by Brunswick , a local processing company that ships them around the world. 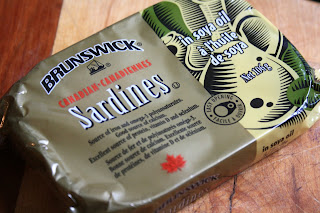 I just returned from a holiday in France where sardines are revered and where canned sardines from Brittany (where I was visiting) can fetch a hefty price. Here in New Brunswick we eat them on crackers as a snack or a lunch, an everyman’s meal and well-priced at that.
I’d say we appreciate our sardines, but we take them for granted.
Michael Pollan, in his book Food Rules says “Eat the little fishes” and sardines are one of those “little fishes”. They’re full of healthy omega-3 essential fatty fats. 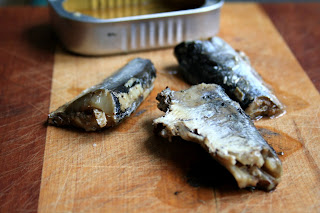 Sardines have a strong-ish flavour and a velvety texture. I love to toss them with pasta, capers and lemon but after enjoying a delicious lunch in Brittany last month that featured pesto-grilled sardines alongside new potatoes I got some new ideas.

Ah potatoes, another regional favourite. We can thank the McCain family for putting New Brunswick on the Canadian potato map, nestled Florenceville, in the potato belt of Western New Brunswick. More than 50 years ago they started their French fry business and never looked back. 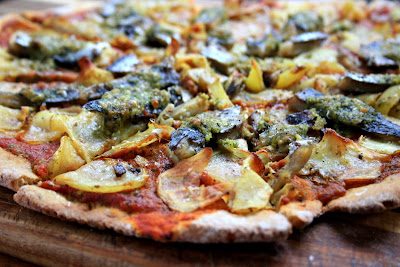 (makes three thin crust pizzas)
This is a slight adaptation of a recipe from a friend that can also be used to make an Italian loaf.
To make the pizza:
The Canadian Food Experience Project began June 7 2013. As we (participants) share our collective stories through our regional food experiences, we hope to bring global clarity to our Canadian culinary identity. The project was started by
Twitter Facebook Pinterest Print

I’m Bridget, a busy mom who is trying to raise my kids to be adventurous eaters who appreciate good food.